LP-PWI instruments developed by our company for JUICE, one of the largest missions developed by the European Space Agency, leave Poland and start their journey to space. The instruments are transported to Germany, where they will conduct the final magnetic tests and will finally be integrated with the spacecraft at the end of 2022. The mission will be launched in 2023 aiming at Jupiter.

The instruments are an element of unique architecture of the spacecraft, which will be launched to space as JUICE (Jupiter Icy moons Explorer). The satellite will be investigating Jupiter and its icy moons – Ganymede, Europa and Callisto – where it will search for answers to the fundamental questions of evolution of the Solar System and life within it.

Astronika instruments called LP-PWI (Langmuir Probe – Plasma Wave Instrument) are deployable booms ended with plasma electric potential probes. The main objective of the booms is to deploy the probes 3 meters away from the spacecraft and to an angle of 135° each, to allow them investigations of plasma environment within the Jupiter’s magnetosphere.

As the Project Manager of JUICE at Astronika, Łukasz Wiśniewski says that development of these instruments required a non-standard approach and a level of innovation to meet the challenges of variety of environments:

The instruments developed for JUICE are extremely lightweight, they weigh less than 1.3 kg. They had to be developed in a way that would guarantee them to withstand large loads, to which they will be subjected, as well as to make sure they would not destroy themselves during deployment, Łukasz Wiśniewski comments and continues: Another important challenge was exposition to extreme temperatures. During its journey, our instruments will be subjected to temperatures around 200°C around Venus and even -200°C, when the spacecraft will submerge to Jupiter’s shadow.

Our engineers developed 5 flight models of LP-PWI. Four of them will be integrated with the satellite and will be launched to space, one of them is a spare model. The instruments were designed and developed by our company using a number of innovative technologies custom created for this mission.

The last tests before launch to Jupiter

The LP-PWI instruments have successfully reached the end of a long and demanding acceptance campaign consisting of a number of tests, which confirmed their effectiveness and reliability. The conducted tests consisted of functional tests in simulated microgravity, vibration tests and thermal-vacuum tests.

The successful conclusion of these tests in Poland means that the instruments can start their journey on towards Jupiter. Before their delivery to our main contractor in Germany, LP-PWI require to go through final magnetic tests. They will verify magnetic cleanliness of the instruments to ensure that their work will not disturb work of other instruments of the spacecraft.

After these final tests, LP-PWI will be delivered to the mission integrator – Airbus Defence and Space in Friedrichshafen, where they will be permanently fixed with the satellite at the end of 2020. The satellite will be launched from Guiana Space Centre in 2022.

Success thanks to international cooperation

Apart from LP-PWI instruments, Astronika developed another type of mechanism for JUICE mission – a deployable antenna system called RWI – Radio Wave Instrument. The mechanism is currently in the testing phase and, like its plasma counterpart, will be integrated with the satellite. Both sets of instruments have been developed in RPWI consortium (Radio Plasma Wave Investigation) headed by Swedish Institute of Plasma Physics in Uppsala and apart from Astronika consisting of Space Research Centre PAS and Tohoku University. Astronika is responsible for engineering part of the project, i.e. design, development and verification of instruments for their tasks in space. Instruments data will be collected and analyzed by the Institute of Plasma Physics and Space Research Centre.

Astronika is a leader of Polish space sector. Our engagement in largest ESA missions confirms that we strengthen our position not only in Poland but also internationally, Łukasz Wiśniewski commented.

This was not the first international success of our company. In 2018, Astronika together with Space Research Centre PAS developed a mole penetrometer sent to Mars on board of NASA InSight mission. Its task is to burrow itself up to 5 meters depth into Martian subsurface. Astronika developed dozens of mechanisms projects, 7 of which are flight projects.

The effects to be known in 9 years

JUICE mission launch is planned for June 2022 and the voyage to Jupiter system would take around 7 years. The instruments will allow to study the plasma environment within Jupiter’s magnetosphere but most importantly they will study the subsurface oceans of icy moons – Ganymede, Europa and Callisto. The scientists hope that the mission will bring us closer to answers to fundamentals questions about our Solar System and life within it – both extant and extinct. Jupiter icy moons may harbour large amounts of liquid water, the most important ingredient of “life as we know it”.

The mission is one of the largest science missions developed by the European Space Agency and first developed under strategic scientific program called Cosmic Vision. Their total cost amounts to €900 million.

Media about this event 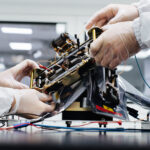